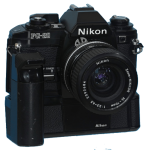 The roots of Australian Images date back to the late 1980s. The arrival of Jamie's first camera, -a 35mm Nikon FG20- and his first 4WD, -a Suzuki Sierra- began a lifetime of interest in four-wheel-driving, photography and gadgetry.

Two decades later, with the release of mainstream digital SLRs and video cameras, those interests became a business, beginning with the photography and video coverage of the 2004 Nissan Trials, an event in which Jamie had competed twelve years earlier.

Over the subsequent years, Australian Images has covered some of Australia's biggest 4WD events -shooting both stills and video- in addition to producing DVDs and directing live-stream coverage of the events. Event coverage extended to photo-journalism assignments for Unsealed 4x4, 4WD Action, Dirtcomp and Overlander magazines.

Jamie was nominated for Capture Magazine's Australian wedding photographer of the year in 2008.

Our photographs, DVDs and stickers are all proudly Australian-Made

The emissions from our Land Cruiser are offset through Greenfleet