Several years ago, as part of my Project 200 build, I conducted a comparison between the Nemesis and the LED215 from Lightforce. That original version of the LED215 was replaced with a second version after a design dispute, and that version has now been replaced by the Genesis LED as Lightforce's top LED offering.

The Fyrlyt Nemesis is a traditional style driving light, bucking the HID and LED trends for a German-made 24-volt, 250-watt halogen globe. This is located within a 210mm composite housing, with a Goretex vent and a polycarbonate lens. The body of the light has a billet aluminium mounting foot and globe holder/heat sink. The reflector is plated aluminium. All of the components are replaceable, with the lens and globe easily changed in under a minute, without tools.

The Nemesis has a colour temperature of around 3400ºK, and a claimed Colour Rendering Index of 100.

When fitted to 12-volt vehicles, the Nemesis lights include 12-24v transformers to provide the lights with the required 24 volts. The transformers are mounted remote to the lights, typically within the engine bay. Total current draw is 22-amps per light.

At the time of writing, the Nemesis RRP is $990 a pair for the 12-volt versions, but generally less online. Or $630 a pair for the 24-volt versions (no transformers supplied). You'll also need a heavy duty wiring harness. If you wire the lights yourself, ensure you use appropriate cable using a voltage drop calculator, limiting voltage drop to <1v. 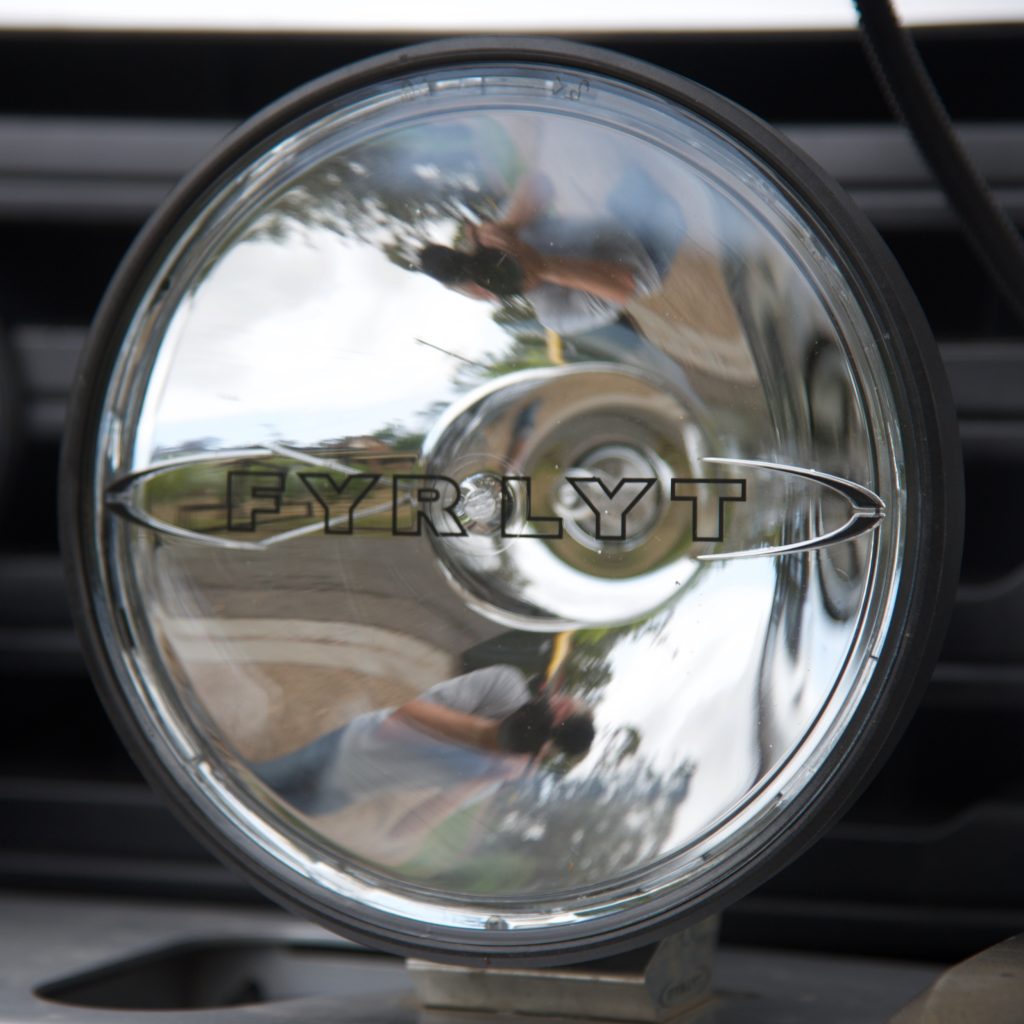 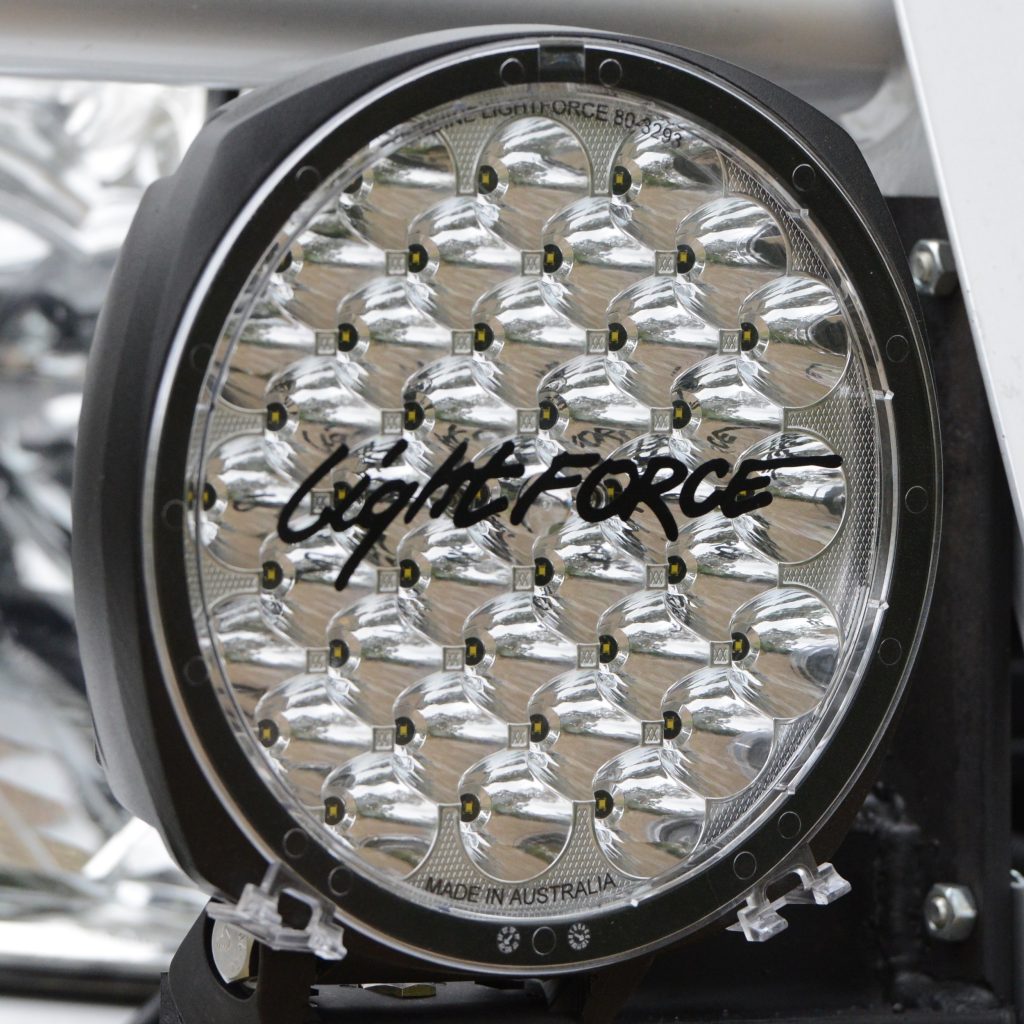 The Genesis is Lightforce's 3rd version of their premium LED offering. At 210mm in diameter, they are slightly smaller overall than the previous LED215s, however the Genesis adds one extra LED, for a total of 37 per light. Current draw is 11 amps per light. They also have daytime and night-time running light modes using a subset of the LEDs, although I didn't test these.

The Genesis has a metal casing which doubles as a heat-sink, and a polycarbonate lens. There's also a second polycarbonate clip-on lens over the top of that. The Genesis uses the same plastic-composite mounting foot as the HTX. The colour temperature of the lights is 5000ºK, and the claimed Colour Rendition Index (CRI) is 70.

In the interests of full disclosure, readers should be aware that Fyrlyt have asked me to conduct this comparison. They gave me the Nemesis lights several years ago at no cost (which I'm still using), and they loaned me the Genesis and HTX lights for the testing (I've since returned them). They also provide my son with some karting sponsorship. All that said, I'm not employed or contracted by Fyrlyt and they had zero input into the testing methods, content or results.

I have endeavoured to make the testing completely transparent and repeatable to avoid any accusations of bias. The still images below were taken in Nikon NEF raw format, and can be downloaded to verify the images settings have not been manipulated.

I left my Nemesis lights fitted to the vehicle, running the original wiring loom. I then fabricated some temporary brackets for the Genesis lights, and attached them to the bullbar next to the Fyrlyts. The Genesis lights obstructed the factory high-beam lights, so these were disconnected for all of the testing.

I fitted a GoPro Hero 6 Black to the LandCruiser, recording in 1080/25p mode. I then went for a drive on a few local rural roads, switching between the Nemesis and the Genesis lights. The camera was manually locked to a shutter speed of 1/25th second and an ISO of 1600. This is extremely important, as it means the camera does not compensate for different light levels by auto-adjusting exposure. With most vehicle lighting comparisons, the camera's auto-exposure mode makes the comparison worthless, because it automatically adjusts to allow for the different light levels.

For the 'road' still images, the vehicle was parked, with the engine running at ~1000rpm. The factory lights were off or completely covered, so the only light source was the driving lights being tested. Be aware though, that this isn't truly representative of real world lighting performance, because the vehicle headlights will normally add to foreground lighting, as you can see in the video above. For the testing, traffic cones were placed at distances of 250, 500 and 750 metres, as shown on the map image. A Nikon D800 camera and Nikkor 24-120 ƒ4 VR lens was placed on a tripod just to the side of the LandCruiser. The camera was manually locked to a shutter speed of 3.0 seconds, an aperture of ƒ/9 and an ISO of 800 for all of the images. Focal length was 48mm.

The 'foliage' still images were taken at a range of approximately 50m. The vehicle was parked, with the engine running at ~1000rpm. The factory lights were off or completely covered, so the only light source would be a single unit of the light being tested. A Nikon D800 camera and Nikkor 70-200 ƒ2.8 VRII lens was placed on a tripod just to the side of the LandCruiser. The camera was manually locked to a shutter speed of 1/20 second, an aperture of ƒ/4 and an ISO of 800 for all of the images. Focal length was 200mm.

For all tests, the camera was set to shoot NEF-RAW 12-bit lossless-compressed. The images were then imported into Apple Aperture software using its standard raw processing algorithms. No adjustments were made, other than to white balance as noted below. The unprocessed RAW images can be downloaded below. You may require specialised software to open them, and there may be slight variations in the result depending on the software used. 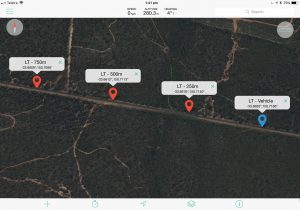 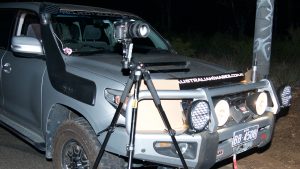 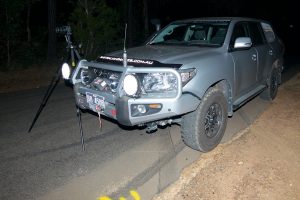 These images give an idea of the light provided in isolation (headlights off/covered).
But remember that in the real world, the foreground will be brighter, as it will also be illuminated by the vehicle's headlights.
The video above gives a better idea of real-world driving performance.

Shown with correct white balance for each light 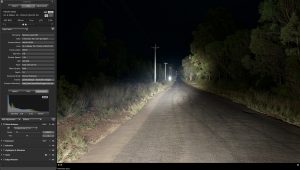 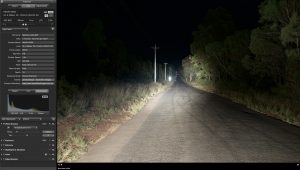 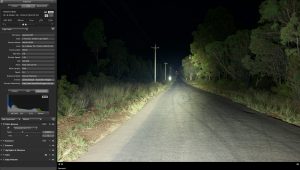 Shown with correct white balance (as above) 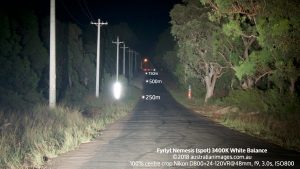 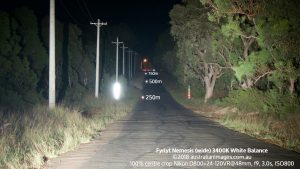 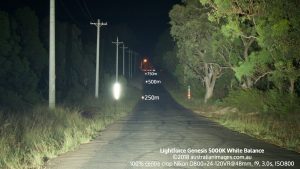 This makes colours the same for all lights, even if that's not how they really look. 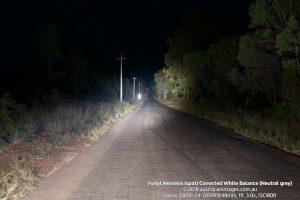 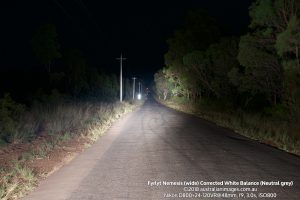 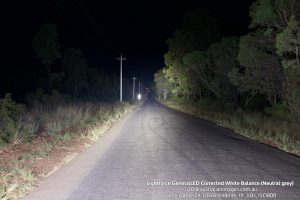 Shown with correct white balance for each light 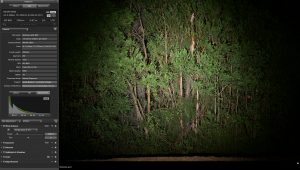 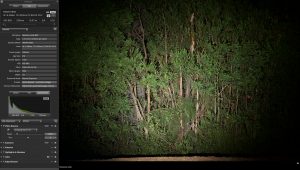 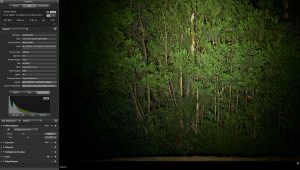 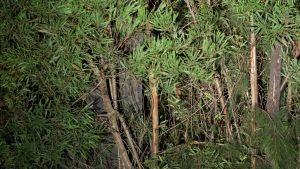 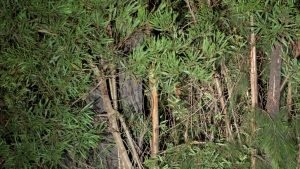 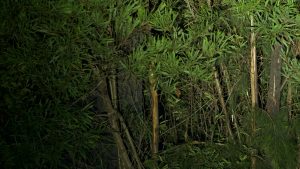 The short version of the conclusion, is that it's very similar to the way I felt after comparing the Nemesis to the old LED215 a few years ago. Performance-wise, I really can't pick the difference between the original LED215 and the new Genesis LED. For the long version, read on...

Using a halogen light source may be considered 'old fashioned' these days, but the quantity and quality of light produced by the Nemesis lights really is excellent. Probably why they've formed a bit of a cult following!

The Fyrlyts deliver a large amount of nice, natural-looking light. They are particularly good at mid-range distances of 100-400m, where they illuminate the road and edges with excellent contrast. I generally run my Nemesis with both lights on the 'wide' setting, which I find produces a better light in the most useful distances (with a slight sacrifice of absolute range compared to the spot setting).

I've been running the Nemesis on the LandCruiser for over three years. The casings and reflectors are all still in excellent condition. The lenses have some minor pitting from sand and bugs, and I replaced them before conducting this test in case performance was affected. But I wasn't able to see any difference after changing them, and will keep the old lenses as spares. I'm still running the original globes, which is pretty impressive.

The current draw of the Nemesis is sometimes cited as an issue, but on most modern vehicles it's not anything to be concerned about. A pair of Nemesis lights will draw a total of 44 amps (compared to 22 amps for the Genesis). But to put this in perspective, the LandCruiser 200, Ford Ranger and Mazda BT50 all have 140-amp alternators. The Prado and Hilux are both 100-amps. So a pair of Nemesis lights doesn't come close to exceeding the capacity, even assuming there are numerous other accessories running. It is a factor worth considering if your vehicle has a low amperage alternator, however.

As I mentioned in the 'short' conclusion, the performance of the Genesis LED is almost identical to the old LED215 I tested a few years back. There may be some laboratory-level differences in output, but visually I couldn't pick a difference between the two. That's not really a bad thing, because the LED215 did set a benchmark for LED driving light performance, although I suppose there would be some expectation of a performance improvement in the years between the release of the two products.

The Genesis provides a good volume of light, with slightly more at the wide end than the Nemesis, but slightly less at mid to long ranges. Unlike the HTX's LED ring, the Genesis (with almost twice as many LEDs, all aimed forwards) does not have any advantage over the Nemesis on tight winding roads. The reflections from signs are far more severe than the HTX and also worse than from the Nemesis, probably due to the cool colour temperature.

As with the LED215 and the HTX, my biggest personal dislike about the Genesis isn't the volume of light, it's the colour and quality of the light. Subjectively, (at the risk of repeating myself) I don't enjoy using 'cool white' driving lights. More importantly though, the LEDs deliver measurably poorer colour rendition and contrast than the halogens of the Nemesis.

The construction of the Genesis is certainly better than the old LED215, and they are apparently made in Australia (the LED215 was made in China), which is a nice change. They are now sealed and have a Goretex vent (as the Fyrlyts have featured for years), which should solve the condensation problems that were common on the old LED215. They are also very shallow compared to the Fyrlyts, which is an advantage if mounting depth is limited.

One downside from my perspective is the new plastic/composite mounting foot which is shared with the HTX. As I noted in the HTX review, this foot design allows the light to vibrate unless you use three mounting bolts per light, which is not an ideal situation. However, the vibration of the lights (using just a single mounting bolt) is nowhere near as severe as it is on the HTX, whose pencil-thin HID beams highlight the problem.

What would I buy?

If you've read the above and watched the video, then it's not too hard to predict that the Nemesis is my choice between these two lights. That's not to say the Genesis is a bad light, because it isn't. But the sole performance advantage it has over the Nemesis (being slightly more light at the wide end) doesn't overcome the disadvantages in mid-long range performance, colour, contrast and price.

Bringing the previously-tested HTX into a 3-way tussle, I actually rate the Genesis above its more expensive Lightforce stablemate. While both the total light volume and the ultimate range of the Genesis lag behind the HTX, it's just a nicer light to drive behind. However, for the reasons already outlined in both these comparisons, if I were buying a pair of driving lights tomorrow, then it's undoubtedly the Nemesis that is the pick of the crop.

Notify me when available